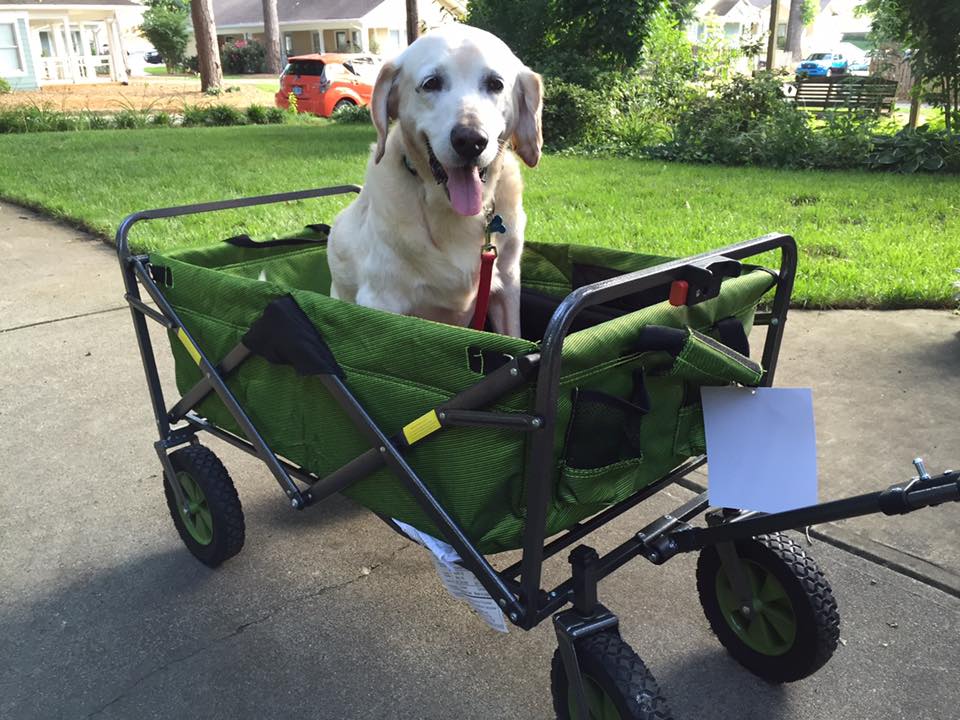 At this time last year, we were scrambling to 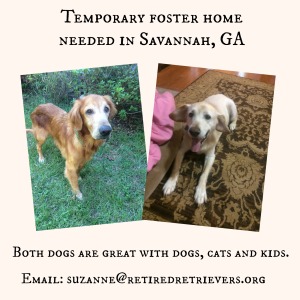 find temporary foster homes for George and Brutus, two unlikely brothers who came from different places but were adopted from us by the same family. When that family had a sudden life change, George and Brutus found themselves back in our care. They spent two weeks in boarding because we had nowhere to put them, and then Tripp and Melissa Rockwell offered to foster them in Atlanta.

George and Brutus enjoyed each others company, but they were not what we would call a bonded pair. So just like their journeys began in different places, their life paths eventually diverged.

This is George’s story, as written by his mom.

When Suzanne reached out with a need to foster 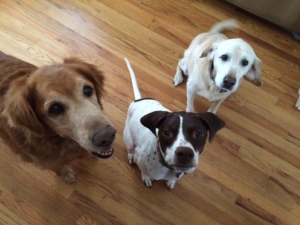 George and Brutus, well, there had to be some thought put into it.  We don’t have a large house, and already had one very energetic Pointer, and an 11 year old cat.  But Retired Retrievers was in a bind, and you figure, well, it’s not forever, so bring them on.

They arrived smiling and having had a great road trip from Savannah to Atlanta, and got out of the car with their “we’re here!” attitudes.  Eden and Calvin welcomed them with open arms and we all settled in.  We were new to the foster world and you can tell yourself, it’s not forever but there are general niceties that you consider when fostering.  George was very arthritic, it was plain to see and his toenails needed cut in a big way.  We called our favorite mobile vet who stopped by one day to test the shocks and kick the tires on both boys.  We dubbed them Statler and Waldorf like the 2 old guys on The Muppet Show.  Both George 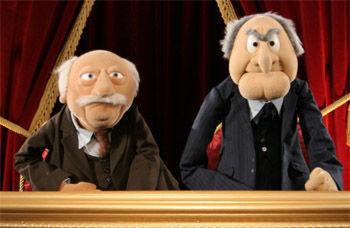 and Brutus got a generous free of charge pedicure and it helped tremendously.  Dr. J also came back with ear meds for both boys and that also went a long way in making them more comfortable.

Having lost a 13+ year old Aussie/Lab mix in 2014, we knew the ins and outs of dealing with senior pets, so we put everyone on glucosamine as well.  That stuff really is amazing.  Brutus was the more mobile of the two and went to the dog park with Eden a few times a week, but George had trouble walking and couldn’t make the ½ mile hike to get there.  We did get him to doggie ice cream at Taj Ma Hound though, and he loved the attention from the outside world every Thursday night.

After a few months, the foster stint came to an 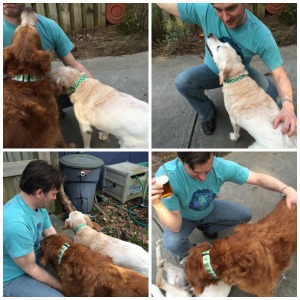 end and we sat and talked about keeping one of these guys. They both had great smiles and attitudes and adored Tripp. Someone at some point in time, had been “a boy” for them and they loved to see Tripp come home and give them rolls and pats and they lapped up every ounce of attention anyone would lavish upon them. But we kept coming back to George’s mobility issues and decided we’d keep him, since he seemed the less likely to be adopted.

Suzanne drove up to Atlanta one weekend and said her goodbyes to George and loaded Brutus up to head back south. We removed the baby gates, allowed George free rein of the house now, and he marched through the doors of our hearts.  And after the pedicure and two months of glucosamine, headed up the stairs every night for bed!

The regulars at ice cream noticed that once George knew he was ours forever, his attitude got even better. He went to ice cream with a new found “hey look at me, I’m part of a family!”  About a week after we officially adopted George, he got some wheels. 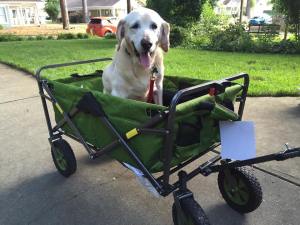 The wagon gave him a new found freedom and his sister Eden served as his transportation director.  We hitched her up to his wagon and every other day, George got to the dog park.  He had a good time wandering and poking around but getting there was always too much for him.  Once he had wheels, the neighborhood quickly knew “the dog in the wagon” and little kids would stop him for a hug and some love.  George was living the life of a Rockwell dog and he relished it.  He slept on an orthopedic dog bed, next to Tripp’s side, and after dinner each night, we’d get him down the block for his evening constitutional.  When the sun went down, George got himself upstairs and off to sleep.

George was never mean, he could put Eden in 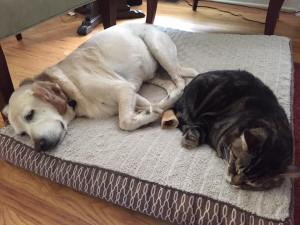 her place when she’d pester him too much, but he became Calvin the cat’s buddy quickly. In fact, Cal had a say in who we kept as we’d often find him on the same bed as George when he was a foster. They probably set us up as soon as he got there!

When Tripp left the house, and I’d be working from the home office, I could find George for upwards of two hours, still waiting by the back door in case Tripp would return.  If he left for a weekend, I’d finally have to pry him away from the window; he’d just stand there watching for his return.

If you own a cat, you realize you clean up pet puke regularly.  And when we thought we were cleaning up Cal’s, we realized retrospectively, it was George.  He was never sick after he came to live with us, so we weren’t even looking for it. But when I was traveling and 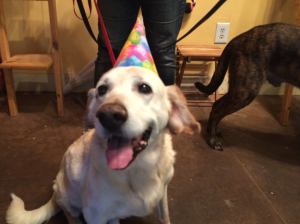 Tripp was home playing single parent, George began vomiting and didn’t stop.  We talked at 2 a.m. about what to do, and Tripp loaded him up and took him to the ER.  The got him stabilized and even gave him some plasma after a day to see if he’d improve. But it became clear rather quickly, that George was getting ready to say goodbye.  I got home the next day and we went directly to the hospital.

Poor George lifted his head when they brought him into the room but that was about all he could muster.  We’ve had to say goodbye to too many pets over the last few years, but in looking at George, it was very clear that he was ready.  We all said he was 14 years old but really it’s hard to tell.  His teeth were worn level and his poor old body was never kind to him for the time we loved him. We helped George to the Rainbow Bridge that afternoon.  He went quickly and we honored him as much as any dog we’d had for the full 14 years.  He was ours through and through.

In the 8 months that we were blessed to have George in our family, he got to the BlueRidge Mountains twice, jazz nights in Oakhurst, doggie ice cream every Thursday and as much love as we could possibly have given him.  He was a funny guy, he passed out smiles to anyone he came across, and we spread his ashes at the dog park, where he truly got the chance to be a real dog. 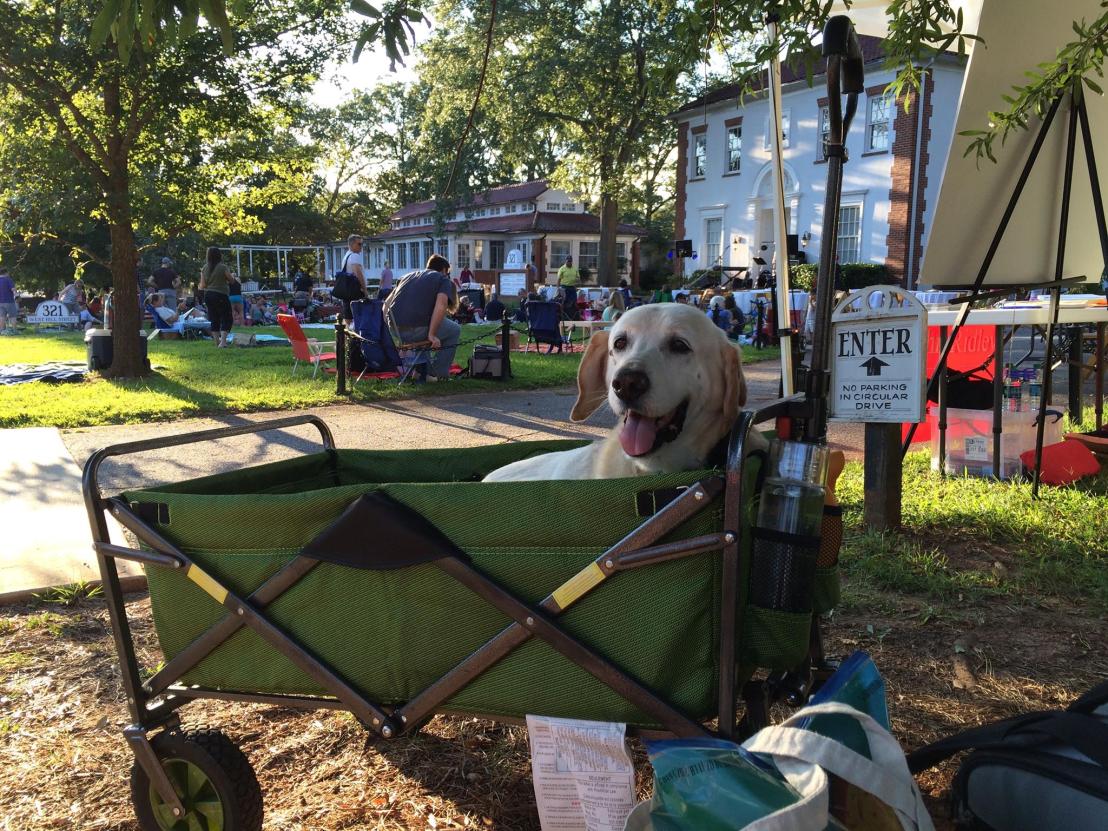