Noah, A Once Sad Dog

When we picked Noah up from 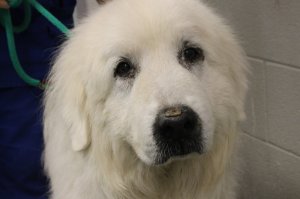 the shelter in South Carolina, a shelter employee stopped us as we were leaving and asked us why we chose him. She said, “He’s not a retriever and we’re a few hours away from Savannah…how do you decide which dogs you are going to rescue?”

Our response was: “It’s the eyes. He has sad eyes.”

It’s true. We receive multiple emails every day about old dogs who need saving and, at this point, we don’t have enough foster homes or resources to save them all. We often have to make difficult choices. The choice to save Noah, however, was an easy one. He had some 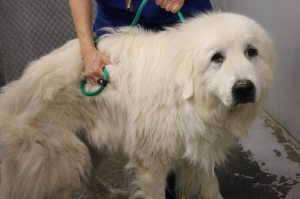 of the saddest eyes we had ever seen and we wanted to make him happy.

Noah had good reason to be sad. He was a 10-year old emaciated Great Pyrenees whose owner first tried to give him away in the parking lot of the shelter. When that didn’t work, the owner brought Noah inside, claimed he found him as a stray, and then walked away without looking back. We can’t imagine how scared Noah must have been.

Noah slept most of the way back to Savannah and we quickly realized what a gentle giant he was. He got along with everyone and settled in at our home base right away. We took him to get groomed, which made him look like a different 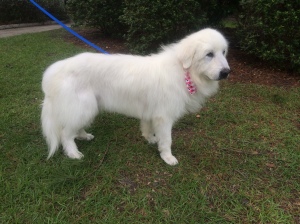 dog. He was so clean and white and fluffy! We also made an appointment for him at Central Animal Hospital, where they donated a series of laser therapy treatments to help his old hips and legs.

It seemed as though Noah had been an outside dog in his previous life because, given the choice, he would go outside and sleep in the dirt rather than resting inside on a comfortable dog bed. He quickly got over that, as you’ll see below in the note from his parents, but all we could do was laugh about the fact that the one dog from our pack who wanted to sleep in the dirt was the dog with the pure white fur. 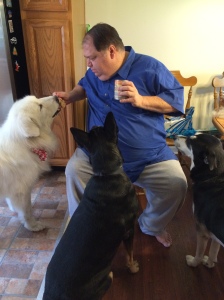 We sent an email to a couple we had met with a few times already to see if they would be interested in meeting Noah. The Cowarts had been looking to adopt another dog for awhile and were doing their due diligence in finding the right fit. They already had two rescue dogs, Roxy and Merlin, and the new member of the pack needed to be able to fit in. We took Noah over for a meet and greet, which turned into a trial visit, which turned into an adoption. Noah still holds the record for shortest shelter-to-adoption time ever: two weeks! And when we started receiving pictures of Noah and his siblings being spoon fed by their dad, we had no doubt that he was right where he was meant to be. There would be no more sad eyes for Noah.

As with all old dogs, Noah’s time with us wasn’t long enough. He recently crossed the Rainbow Bridge after a brief and unexpected illness. We will always be grateful to the Cowarts for taking a chance on an old dog and making Noah part of their family. They truly gave him the best 6 months of his life. Watch the videos below and read the note from Noah’s dad to learn more about Noah and to see just how much his family loved him. Rest in peace, sweet boy.

Here are two short videos that Noah’s parents made about him:

A Once Sad Dog: https://youtu.be/3rUYC4gCymk

And here’s a note from Noah’s dad about the polar bear they loved so much:
“When we first brought Noah in the house, I remember you telling us how he loved staying outside and did not like beds.  We always joked at what a liar you turned out to be as he learned the life of a Cowart child.  He grew to love the indoors and the comforts of dog beds and human couches.  One day when we were at Petsmart there was a little girl that saw Noah and starting tugging at her mom saying, “Look mom a polar bear.”  That’s when I starting calling him my personal polar bear.  April came up with his main nickname when she called him The White Knight one day and it just stuck. 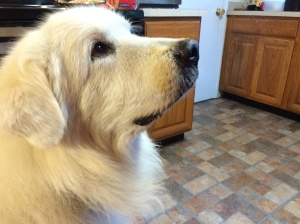 I never proved it, but stuff would be missing from the counter constantly.  Everything from a box of milk bones to two racks of ribs.  Like I said, I can’t prove it, but it hasn’t happened before or since Noah and after the rib incident his face was covered with dry rub, just saying.  I remember him having so much fun at Wag-o-Ween that I almost had to carry him to the car.  Saturday mornings, before April would wake up it was always me, Noah, and Roxy watching Westerns.

Perhaps the biggest hole left by Noah is next to my desk.  Whenever I worked in the office, he was always curled up next to me.  About ten minutes after going to the front room to watch TV with April, it would never fail to see Noah poking his head around the corner wondering what happened to me. Noah was such a wonderful name for him as he loved playing in the rain and mud, which is a good thing for a white fluffy dog to do.  He loved two things in life, chicken and lasagna.  It had to be homemade lasagna though.  Frozen is not good enough for my Noah.  The one time he would wag his tail was when you brought in a box of fried chicken.  He would go absolutely nuts over fried chicken.  He was

always a blessing when I would get home after work.  While he would want to rough house with Roxy and Merlin, he would always back down because of his joints, but when I would walk in the front door, he would just knock them out of his way to greet me.

While Noah was only with us a short time, he made a big impact in our lives.  We are eternally grateful for the gift of Noah that Retired Retrievers blessed us with and will continue to help you in anyway possible.  After the grieving process we will figure out our next move.  Noah was an incredible dog and it was an honor to call him my son for a short time. While there is so much to remember about Noah, I think I have covered the highlights.” 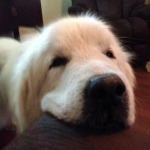