The first thing we said when we met Jake was, “This poor old g 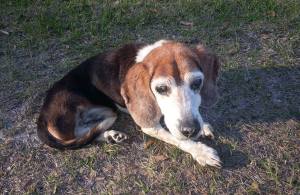 uy won’t be around for more than a few weeks.” One year later, Jake has proven us wrong and we couldn’t be happier about it.

On March 2, 2014, a Good Samaritan named Jennifer found Jake, an ancient three-legged Beagle, trying to drag himself across a road. In the state he was in, she knew he couldn’t have gotten far on his own, so Jennifer picked him up and started knocking on doors to see if anyone was missing an old Beagle.

From what she was able to piece together, it sounds like Jake used to belong to one neighbor, who then had a stroke, and he thought another neighbor had been caring for Jake for the past 4 or 5 years. In reality, it didn’t seem like anyone had actually been “caring for” Jake, and no one wanted to claim him, so Jennifer brought him home, bathed him, and started working on finding a

better place for Jake to spend whatever time he had left.

Our friend Amanda, who we met through volunteer work at our local animal control facility, told Jennifer about Retired Retrievers and helped us connect with her so we could find out more about Jake. When we saw the pictures of his sad eyes and toenails that had grown so long that they were corkscrewing and growing back into the pads of his feet, there was no way we could say no. We told Jennifer we would take him and we made an appointment for Jake the next day at Central Animal Hospital.

We took care of his immediate medical needs, including treating his eye infection (we initially thought he was blind, but he is not), trimming his nails, and then soaking his feet to treat the holes in his pads created by his overgrown nails. After that it was a wait and see situation. So we kept waiting and seeing. And seeing and waiting. And waiting and seeing. After a few weeks we realized Jake had decided to stick around for awhile.

The ancient Beagle settled in as a permanent resident at our home base. He kept an eye on the comings and goings of the larger dogs, and seemed content to spend his days eating and sleeping. We started researching wheelchairs because we wanted to increase Jake’s mobility. While some three-legged

dogs get around just fine, Jake couldn’t seem to do more than drag himself around, a little bit at a time, using his two front legs. Our friends at Maranatha Farm Animal Rescue let us borrow one of their wheelchairs to see if it was even an option for Jake before we went out and invested in one. Unfortunately, Jake’s front legs aren’t strong enough to make the wheelchair a viable option. Whether he was born with his front legs deformed, or he was kept in too small of a crate for a long time – forcing his legs to grow at odd angles – we don’t know. But his front legs just can’t do what they need to do in order for him to use a wheelchair.

We carried Jake around in a backpack for awhile after that, even taking him on a camping trip. But he really seemed most content when he was napping in his bed, so after some time we let go of our dreams of increased mobility for Jake and just let him 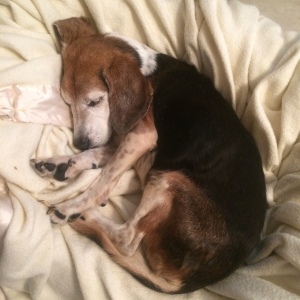 be. A few months later Jake went through a rough patch and we thought maybe his time with us was coming to an end. After months of befriending the other dogs and scooting himself around the house and the yard, he no longer seemed like he was getting much enjoyment out of life. We took him back to Central Animal Hospital, but beyond Jake’s typical old dog issues, our primary vet, Dr. Hill, couldn’t find anything medically wrong. He asked about Jake’s daily routine and recommended that we find a way to get Jake out and about for more mental stimulation. He thought spending all day in bed might be contributing to Jake’s malaise. We’re not sure if Dr. Hill suggested the baby stroller or we did, but we left his office that day determined to revisit “Operation Increase Jake’s Mobility”, and a baby stroller seemed like the obvious next step.

A few days later we bought a used baby stroller off of Craigslist (from a young dad who got a good chuckle out of the fact that we were buying it for a geriatric Beagle) and Jake went for his first spin around the neighborhood. It didn’t take us long to realize that he LOVED his stroller. We had finally found an answer to Jake’s mobility issues. He seemed so happy to be out and about,

watching the world go by and getting some fresh air. Dr. Hill was right – Jake needed more mental stimulation. Once we made the stroller outings part of his regular routine, Jake started enjoying life all over again.

We’ve learned not to try to guess how much time we’ll have with this little nugget, because he will surely prove us wrong, so for now we’re just taking it one day at a time and enjoying Jake while he is here. He still sees his Good Samaritan, Jennifer, from time to time because she watches him for us when we go out of town. And every time he goes out in public he makes new friends. Children, especially, seem to be touched by his gentle nature and the fact that he doesn’t let his disabilities get him down. If you’re ever out and about in Savannah and you see a smiling Beagle in a stroller, be sure to stop us and say hello!

Happy one year anniversary to Jake, and thank you to Jennifer for saving this old guy and helping him find his way to us.

If you would like to support Jake’s ongoing care, please click here to make a tax-deductible donation. We would also love to get Jake into local schools where he can teach children about people and animals who are different, but we haven’t had much time to explore that option yet. If you have any connections to schools in the Savannah area that might be interested in a Jake visit, please send us a note at suzanne@retiredretrievers.org.) 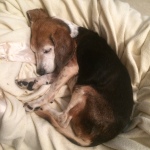