A New Life for Shady

One look into Shady’s soulful eyes and you

know that she is a survivor. We’ll never know her full story, but we do know what happened most recently to cause the sadness in those eyes.

On November 24, 2014, we received an email from our friend Jenn at Atlanta Dog Squad. It was a message that had been forwarded several times through various animal rescue networks. The email said that an elderly woman had recently passed away in a rural area about 90 miles southwest of Savannah, GA. When her son came up from Jacksonville to close up the house, he kicked the dogs and cats out of the house and left a bag of dog food in the yard before going home. Two of the dogs were black labs, and one of them was obviously a senior.

We reached out to the original sender of the email, Lois from Brantley Animal Rescue Coalition (B.A.R.C.), to see if we could help. She and her friend Gerrianne had been feeding the animals and already had one of the dogs, a Poodle, in foster care.  It had been cold and rainy all week and the animals were seeking shelter under the abandoned mobile home and living off of the kindness of strangers. We told them we would work on finding a spot for the senior.

In order to help this dog (whose name we now know is Shady), we needed to find a new foster home for one of the other dogs already in our care. There are just never enough foster homes for all of the dogs we want to help. Not long after posting our plea, however, we received an email from Chris and Amy, a local Savannah couple who have fostered for other rescue organizations. They offered to foster Walter, a 12-year old black lab who recently joined the Retired Retrievers family. We knew as soon as we met them that Chris and Amy would be wonderful foster parents for Walter. And, they have an 11-year old black lab who looks like he could be Walter’s brother. By helping Walter they helped save Shady. Now that we had an open spot, we let Lois know that we were ready to make plans to pick Shady up.

Just a few days after receiving the initial email, we found ourselves navigating a muddy road out in the country trying to reach Shady. The mobile home sits on a dirt road, but after all of the rain we had been having the red Georgia clay was soft and a bit treacherous. It was the first time we’ve needed to use our 4-wheel drive to rescue a dog.

Lois met us out there and we’re glad she did. We wouldn’t have been able to catch Shady without her. Both dogs were scared and kept retreating under the house. With some offerings of cheese and hot dogs and a gentle voice, however, Lois convinced Shady that it would be okay to let

us help her. This picture with Lois captures the moment that Shady seems to realize life is about to change for the better. We put a harness on her and gave her some more treats and love and then Lois vaccinated her and tested her for heartworms (when she’s not rescuing dogs Lois is a critical care nurse, which comes in handy out in this rural area where there are no veterinarians or animal shelters).

We loaded Shady up in the car, said our goodbyes to our new friend (and hero) Lois, and then followed Lois out a different route which turned out to be a bit less muddy and treacherous. Shady slept most of the way home to Savannah.

Now that we’ve spent a few days with her, this is what we know about Shady: She is very sweet. She has no teeth. We think she is about 12 years old. She is heartworm positive. She hasn’t been spayed and it looks like she’s had several litters of puppies over the years. Her back right leg seems to bother her a bit and our vet thinks she may have an old injury that was left to heal on it’s own. She gets along with cats and other dogs (as long as they aren’t too nosy or energetic). We think she would be good with kids. She will kiss your face when she is happy or wants to show appreciation for your kindness. She is a wonderful old dog who has obviously been through some things over the years, but despite all of that she remains a very gentle old soul. 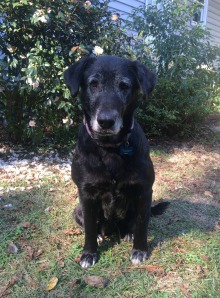 Shady has spent most of the last 48 hours sleeping. It’s almost like she’s catching up on a few weeks or months worth of deep sleep. Once she realized she was allowed in the house and that the comfortable bed with the blankets on it was hers, she hasn’t shown much interest in doing anything other than snuggling up on that bed and napping. She is slowly coming out of her shell and paying attention to what else is happening in the house and what the other dogs are doing. The sadness in her eyes still lingers, but we’ve also seen some hints of joy and happiness underneath. With more time and a lot of love we believe that Shady will realize she is in for a very happy retirement and will know nothing but love and comfort from here on out.

If you would like to support Shady’s care, please click here to make a tax-deductible donation. And if you are interested in giving Shady a forever home, email suzanne@retiredretrievers.org.

Note: Sadly, the third dog is still living at the mobile home. Big Boy is a 5-6 year old black lab (probably Shady’s son) but he is terrified and runs away whenever anyone gets near. Labrador Retriever Rescue of Florida has offered to help him find a home, but in the meantime Lois and Gerrianne and the other B.A.R.C. volunteers will continue to feed him and try to gain his trust. It was a tough decision taking Shady while leaving him behind, but we ultimately decided it was too wet and cold for such an old dog to be living outside on her own. Big Boy will be rescued, it’s just going to take a little longer than we had hoped.  We are extremely grateful to the B.A.R.C. team for everything they have done for these dogs. It’s a sad situation that would have been tragic without their help.

Update 4/15/15: Sarge (formerly known as Big Boy) has been rescued by a wonderful young woman who spent 118 days at the home trying to gain his trust. We will help her get him the medical help he needs and she will provide him a loving home.